On 16 June 2020, Lise Kingo, CEO and Executive Director of the United Nations Global Compact, hands over the baton after five years of mobilizing business to create the world we want. This is her final Executive Update in which she calls for a new generation of corporate social activists who insist on raising their ambition to achieve the Sustainable Development Goals.

Seventy-five years ago, the United Nations set out to put the world on a path to recovery, pledging to “never again” allow the horrors of two devastating world wars. The premise was that a peaceful and just world had to be built on the equal worth, rights and freedoms for every human being. The same universal values and principles which laid the foundation when, at the turn of the millennium, former UN Secretary-General Kofi Annan initiated a “global compact” between the United Nations and business leaders to “give a human face to the global market.”

In launching the UN Global Compact, Kofi Annan reminded us that we all have an active choice to take — between a global market driven by calculation and short-term profit and one which has a human face. Between a world which condemns a quarter of the human race to starvation and squalor, and one which offers everyone at least a chance of prosperity, in a healthy environment. Between a selfish free-for-all in which we ignore the fate of the losers, and a future in which the strong and successful accept their responsibilities, showing global vision and leadership. Failing to do so, he cautioned, would make the global economy fragile and vulnerable to the backlash of all the isms — protectionism, populism, nationalism, ethnic chauvinism, and so forth.

Have we lost our way?

As we set out to commemorate the 75th-anniversary of the UN and 20th-anniversary of the UN Global Compact, we must look around the world at what is happening in front of our eyes — the obvious failure to deliver on those most fundamental values and principles that bind us all together. With Kofi Annan’s words ringing true in our ears, we must ask ourselves — have we lost our way?

COVID-19 has exposed the fragile nature of our progress. The hard truth is that our failure to create a more socially just world has worsened the current crisis, and could hamper our ability to recover faster. Even before the pandemic, social inequalities were widening for more than 70 per cent of the global population. One thing was that economies had bounced back to the levels recorded before the 2008 financial crisis, but in reality, economic growth and labour productivity were mainly carried by low-paid, low-quality and low-security jobs, with more than half the world’s population — 4 billion people — not covered by any social safety net.

Those very same people have now been left disproportionately vulnerable to COVID-19. Nearly half of the global workforce in the informal sector, totalling 1.6 billion workers, are in imminent danger of having their livelihoods destroyed. The 49 million people, who are thrown back into extreme poverty, wiping out two decades of progress. The one-half of the global population who are without access to essential health services.

It is no surprise, then, that frustrations are growing. The meaningless and brutal killing of George Floyd in Minneapolis, United States, by police has further illuminated deep-seated inequalities rooted in the endemic and structural racism that persists today. It has sparked a wave of serious introspection among business leaders and Heads of State across the world. No one is excused from the discussion.

Inequalities and racism, of course, are not isolated to one country. This year’s Edelman Trust Barometer made for sober reading. Their January 2020 report pointed out that more than half of the general population globally finds that capitalism in its current form does not work for them. And amidst the current health and socio-economic crises brought on by COVID-19, additional polling found that the pandemic had exacerbated the sense of social injustice. Close to two-thirds of respondents agreed that those with less education, less money and fewer resources are being unfairly burdened with most of the suffering, risk of illness and need to sacrifice due to the pandemic.

In launching the UN Global Compact, Kofi Annan was clear that without the active commitment and support of business, universal values would remain little more than fine words — documents whose anniversaries we can celebrate and give speeches about, but with limited impact on the lives of ordinary people.

COVID-19 has demonstrated the cost of turning the blind eye to obvious injustices. With less than 4,000 days to get our collective plan of action for people, planet and prosperity on track, now it is time we deliver for all.

The 2030 Agenda for Sustainable Development will not be delivered through incremental improvements to business as usual. Progress to date is a testament to that.  With the Sustainable Development Goals and the Paris Climate Agreement as our lighthouse, and the Ten Principles as our guide, business must undergo a radical business-model transformation that can lead to a new normal — one where the equal worth, rights and freedoms of people always come first in any business decision. Business leaders of the future need to understand that the key to stable markets is social equality. Beyond the challenge of COVID-19, many other crises loom large. From climate change, biodiversity loss and the erosion of planetary resources — this could just be the tip of the iceberg.

That’s why we need business leaders to use this moment to become social activists and rethink their role in the world and their “reason for being.” Not only for the good of society, but indeed the future of their own business.

By deeply integrating “people, planet and prosperity for all” across corporate purpose and values, governance and strategy, business plans and performance management, business leaders can lead the way in the Decade of Action, making a step-change towards SDG ambition.

Let’s choose to be social activists

Now we need the most senior leaders — the CEOs, their executive teams, and the boards — to become activists for social change, within their own organizations, in their daily lives, and beyond. As I prepare to depart the UN Global Compact after five years, I want to leave you with this message: Don’t underestimate the power of your example, your voice and your footprint in the world. Leadership is about having the courage to be the change — indeed, to insist that change happens.

In the words of Kofi Annan, “To live is to choose. But to choose well, you must know who you are and what you stand for, where you want to go and why you want to go there.” As we move into the Decade of Action, let us never lose sight of our mission to be united in the business of a better world, one that leaves no person behind. 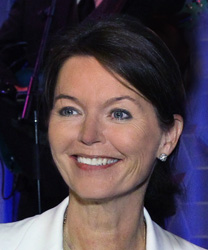